Caroline’s yoga journey began when she started practising Iyengar Yoga in 1997.  She trained with the British Wheel of Yoga in 2002 and started teaching Yoga at gyms and local leisure centres alongside her day job as a Computer Programmer. Over the years she has attended classes, workshops and trainings with numerous teachers who have been inspired by the teachings of Vanda Scaravelli, and she continues her personal practice along these lines.

The birth of her daughter in 2010 was a positive, empowering experience for her.  She felt the Yoga helped her to remain centred, calm and gave her the strength and confidence to birth at home at the age of 40.  She wanted to share the teachings of Yoga with women, to help empower and prepare them for birth and motherhood.  She embarked on the YogaBirth Teacher Training in 2017.  She is now a full time Yoga teacher and part time Computer Programmer. 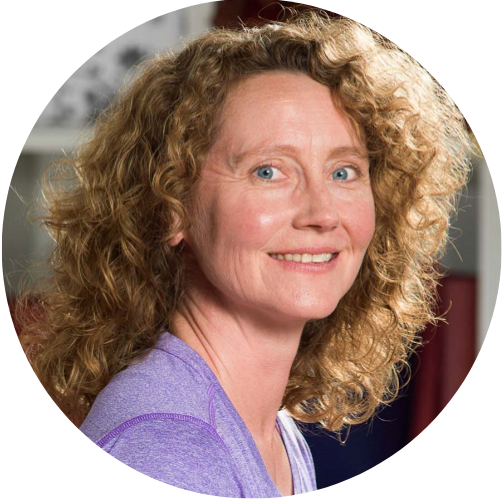 Hello, I’m Caroline an older mom of a daughter, who’s 11.  I’ve been with my husband since 1987 (we met in South Africa), probably longer than the age of some of you!!  I spent my first 11 years growing up in Yorkshire, then my parents decided to emigrate to South Africa in the early 80’s, my dad worked down the pit and was looking for a better life for his family. So I spend my teen years and early 20’s growing up in THE most beautiful country, which will always be dear to my heart.  It was a fantastic experience to move countries at an early age and experience a totally different way of life.

When I finished school I attended college to train to become a computer programmer, and that was my career for 30 years.  A well paid job, but I found it very stressful and eventually lost interest in trying to keep up with technology, as the pace was forever increasing.

In 1997, I decided to try Yoga at the local gym. I’m not a Madonna fan, but it was her profile and the fact she attended Yoga classes that initially sparked my interest.  I started classes basically to ‘stretch’, after training in the gym.  Then eventually Yoga replaced my gym workouts.  I found I always felt good after a yoga class, and that was probably because it was an antidote to the stresses of my day job.

In 1998 I decided to come back to England and try again, this time I was successful in finding work, and my partner came over to join me, the plan was to be here for a few years and return to SA, 23 years later, we’re still here.

I started my Yoga Teacher training with the British Wheel of Yoga in 2002 with Derek Thorne and completed the 3 year course in 2005, prior to that I had attended the 1 year Foundation course with Janet Long of the British Wheel.  As part of the teacher training we were expected to start teaching, so my teaching journey also started back in 2002.  I had originally started the course to learn more about Yoga, not necessarily to teach.  However I found I really enjoyed teaching.

Between 2004 and 2006, I attended Gary Carter’s Teacher Training Course at Natural Bodies, mainly to gain more anatomical knowledge.  This course was very much steeped in the teachings of Vanda Scaravelli, there were many guest tutors who had been students of Vanda who came along to share their knowledge.  My personal practice was already moving in this direction (Breath, Ground, and Spine). I had met Peter Blackaby in 1999 and Gary around the same time, so feel very fortunate to have met teachers who still inform my practice today at such an early stage of my learning journey.

For years I taught evening classes at local gyms, leisure centres and the local Yoga Studio ~ Yoga for Harmony after my day job as a computer programmer.  I also covered classes for local teachers, in village halls and leisure centres.

In 2010 I gave birth to our daughter in our birth pool at home at the ‘grand old’ age of 40!  My wonderfully positive birth experience was the spark for me wanting to share the power of Yoga with other pregnant women.

When our daughter was old enough for me to be away at weekends at the age 7, I decided to embark on the YogaBirth Teacher Training Course to qualify to teach pregnancy yoga.  I chose the course because it too was steeped in the teachings of Scaravelli, and had plenty of birth education in its content.  The YogaBirth course teaches you not only to teach pregnancy yoga, it teaches you to empower women.  At the same time the local Pregnancy Yoga teacher and good friend Carole Rolls was nearing retirement.  The time was right for me to start teaching my own pregnancy yoga classes.